Another day, another specialist!

Today was full of the joy of making an hour and half drive trip, to wait three hours, to see a specialist for five minutes –Neurologist today. However, I didn't feel the usual annoyance and anger and mixture of emotions (ok, mainly anger) as I usually feel going to these yokes… I felt calmer, bit more relaxed… although I really didn't think this is from any kind of healthy, great realisations shit, more the result of long term negative thinking, such as ‘fuck it, sure what’s the point of going, they can’t do anything –and after hours of reading my charts and me having to yet again go over EVERYTHING that has ever happened in my life until now, it will only result in either me, or the doctor (I kid you not, some doctors get real emotional if they can’t fix you) in near tears’… so yeah, today I was grand.

Weirdly enjoyed the visit. Not the hours of waiting of course, but the consultation itself. The neurologist (who I first noted when I arrived was asking the receptionist questions on what to do, and thus I thought she was a trainee administration staff) was young as hell –probably my age, and like me, also looks much younger. Now most would see having a trainee consultant as a bad thing, but let me tell ya, it has it’s perks. For starters, being fresh out of college they are eager to please and still have that
dooey-eyed look in their eyes and dreams of saving the world, one patient at a time. They’re also generally more read-up on conditions than their older peers.

Not only did I have a bit of a laugh, during the very in-debt medical history of my life as well as strength and coordination testing, but she knew about the conditions I already have without very much explanation from me. She was thorough beyond belief, and at the end rather than get upset that she couldn't help me (other than prescribe painkillers), things went the other way, a way in which some but few specialist appointments end, and instead she told me that they (her and the senior neurologist) believe I may have another condition on top of the congenital dysplasia --->Dysautonomia

….say waaa?? Yeah I didn't understand it when I read up about it either. Seems like one of those made up American things, like ‘restless leg syndrome’, IBS, and such…… and I'll stop there on naming the ‘medical conditions’ that don’t exist before I offend more people (note: I believe the persons symptoms are real, just not the named illnesses)…. This is entirely based upon me being a clutz and having vertigo and tinnitus and a couple of other things which are totally unrelated. Anyway, if ya bored and fancy a read, this is the easiest URL I could find, with the least gobblygook: http://www.medicalnewstoday.com/releases/76785.php -there's loadsa different types and such, apparently.

Next appointment with the neurologists in 3 months so I should know more craic by then I guess.

Until then… stayin breezy! 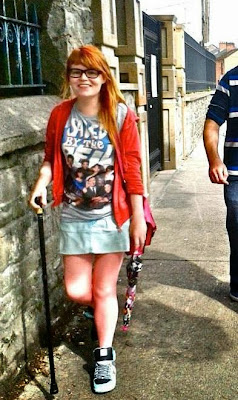