*This is NOT a sponsored post*
As some of you may or may not know, I have a condition called dysautonomia (possibly the POTS variety I feel as I have tachycardia issues, but as it's being classed as a secondary condition in my health case, no one actually cares enough to A.) find out which type, and B.) actually treat it). Click the word which links to further info, but in short -it is a default with my autonomic nervous system, which just about affects everything in my body -all the stuff your body does without having to think about it. Heart rate, BP, temperature control, digestion, breathing and so on. So with that said, obviously the symptoms are numerous and everyone can have varying outcomes. Some people can work, some people have digestion issues while some don't, some people can control their fainting or never feel very dizzy at all, while others faint all the time.

The fainting response is in regard to low blood pressure for the most part. Think of like when you (assuming you are an average, healthy person) get up too suddenly sometimes and have a massive head rush, and feel dizzy as an outcome. This is because your body takes a moment to adjust in the change of your posture when you go from sitting to standing, your blood rushes a bit from your head, and so you get a swoosh sensation. In healthy people this is temporary, and you will rarely even notice it as your body adjusts so quickly to the change in movement. With people with low BP/ orthostatic intolerance issues, this head rush is often prolonged (orthostatic intolerance) -your body is an idiot and can't adjust quickly to the change in posture. Sometimes you might not feel too dizzy or sick on first standing, but can have symptoms the longer you stand.

"Woah, wait, what has she done here? What's going on?",
"Sir, should we send blood back upwards towards the brain?",
"No, no, wait a minute. I want to be sure first that she has changed positioning. Leave all that blood down in here legs. Make her heart beat faster, too".

... I don't know which body parts are chatting here, lol, but you get the gist. My body is a dope and I'm allergic to standing up. This is why you'll also notice that I sometimes will wear compression socks (only a recent thing) which I should do all the time, really, but I'm still adjusting. These socks prevent the blood pooling in the legs so much.

It's important to note that in some case sufferers even have high blood pressure, rather than low blood pressure. I myself notice that mine seems to rocket sometimes very temporarily while standing, before swooping low and staying there.

I'm very used to be dizzy and have little tricks to control fainting (not that I even stand or walk much these days, so that helps, ha). I go through phases of being worse than other times. I eat loads of salt to keep my BP up and sit down when I need to. I find I'm not as bad when physically walking, with the space around me changing constantly (I do feel sensory overload but at the same time more stable in ways). It's standing in ques and such when I feel in the most trouble. In some regards an episode of low BP and other associated dysautonomia symptoms can feel like a panic attack -it is the same fight or flight response that you body typically goes through in both experiences. Hence why it can be hard to diagnose or even spot yourself, especially if you are a young woman. You tell a doctor these signs and symptoms, and panic attacks are their go to. Diagnoses can take years, if ever. Other symptoms sound so disassociated and general, as they are pin pointed in every part of your body. It's such a confusing illness!

"What's happening... all the controls seem to be going haywire!",
"I don't know captain, I think we're going to have to shut things down until we can restore full control. I can't regulate the heart rate, BP or any of the main controls"
"Shut it down, go into emergency mode, stat!".

...Something like that, anyway! My body is a fucking idiot. It doesn't know what it's at or doing most of the time, and as a result, when I'm at my most sick it simply goes into shock and has a meltdown. Fight or flight. It literally can't deal with me standing up. Sometimes I may have to sit down, to restore blood upwards to the brain, but other times I simply have to lie down completely and wait it out. Check out this video from Dysautonomia International.

So as I said -salt is my only go to as I'm not on medication to control it. Staying hydrated is a must and salt is a big part of this too. I have to try and consume more liquids than the average person, and this can be difficult and time consuming. Many sufferers are advised to try drinks like Powerade (that's like Gatorade to anyone reading from the US -which I had a while ago when on holidays and is so much tastier than Powerade) which have electrolyte goodness and so give us that pick me up that we need. I now hate the taste of Powerade from drinking it so much over time. I wouldn't be big into sugary drinks anyway and it's quite sickening if you have to drink loads. A better alternative is to add a pinch of salt to a mixture water and a drop of juice/ diluted drinks.

However, if possible to get your hands on, the ideal solution is hydration tablets or powders which have even higher levels of all that goodness -such as you might see sports men and women using, or for use in medical conditions like diarrhea. I had previously tried Dioralyte which is a solution usually used to restore hydration quickly to those who have suffered such tummy upset, as it was all that I could find in my local chemists. It's really the same type of solution than anything else I guess, and worked ok. Although I didn't feel that pick-me-up feeling that I got with Poweraid. Not to mention I find the taste repulsive. It's almost thick in it's consistency and very much so tastes medicine-y.

So I finally bit the bullet and decided to buy something better online. I knew from talking to other POTS suffers that there are loads of available brands out there, but I decided on the nuun one as it seemed quite popular. I guess I'm also a sucker for bright packaging and the tube design seemed like it would be handy to carry around in my bag when leaving the house.

I eventually found an Irish site that I could buy from, where the postage and product weren't too expensive - Fitness Ireland

I choose two different flavours from their available selection, tri-berry (which I can not un-see as "member berries" since watching South park recently, LOL!) as it seems to be one of the most popular, and strawberry lemonade as well, it just sounded really good!

Delivery was prompt and I received my parcel in a matter of days. They dissolve easily and quickly in a 500ml bottle of water (roughly the amount you should dilute with). The taste is everything I hoped for -light/ mild, not sugary or overpowering and the water doesn't thicken as with Diorlyte. It's refreshing and not at all sickening -very easy to drink.

In regards to the two individual flavors, as they are mild (which is really want you want) it can be hard to tell apart and judge between the two. I loved both but I think the tri-berry wins for me by a fraction. The strawberry lemonade has a slightly creamier taste, while not unpleasant, I found myself drinking more of the tri-berry. They're definitely great if you require a few a day as they are easy to drink! As for dosage, it doesn't really say on the packaging. Looking online at Nuun's responses to this in the past, they suggest you can take a few a day and they shouldn't cause you any harm. As most people use them for sports, while training/ working out, it really depends on the level of hydration that you require/ how much movement your body is doing. Some people who are working out in hot climates daily said in forums that they sometimes take up to 8 a day, if their regime is particularity hard going.

As for dysautonomia/ POTS dosage, I'm not entirely sure, but so far I have been taking two a day (although currently all out, I'll be back on them again). Because of mobility issues (joint hypermobility), standing/ walking is difficult anyway so if I have a "good" day in the future, I may require more. The results? Really good. I feel more energised and can see clearer, definitely less dizzy (for a time anyway). I think the improvement would even be greater if I didn't have the pain and mobility issues from the hypermobility, but even with that I can think a lot more clearer on them. When I could stand I could get a more done around the house, felt pretty confident that I wasn't going to faint (it was strange not having to think about it, even briefly). Quite a bit better than simply adding salt to my fruit juices/ concentrated juice, and I really regret not getting them sooner!

So a big thumbs up from me! It's not a cure, I know that, and they only help with aspects of POTS, but for someone like myself who has no specialist and not on any medication to help, it's a big step in the right direction. I only wish they were more readily available in chemists or shops in Ireland -on that note if anyone ever sees them around Co. Louth, let me know. In the meantime, if anyone is stuck on what to get me for Christmas, see FitnessIreland.ie

And nicely enough this post coincides with Dysautonomia awareness month (October)! Very proud that Ireland joined in the celebrations this year, and the Dublin Convention Centre has lit up turquoise -like many other buildings in cities around the world. Its hopefully a step forward for awareness in Ireland, where we are really falling behind in terms of medical care, diagnosis and general knowledge about this condition. 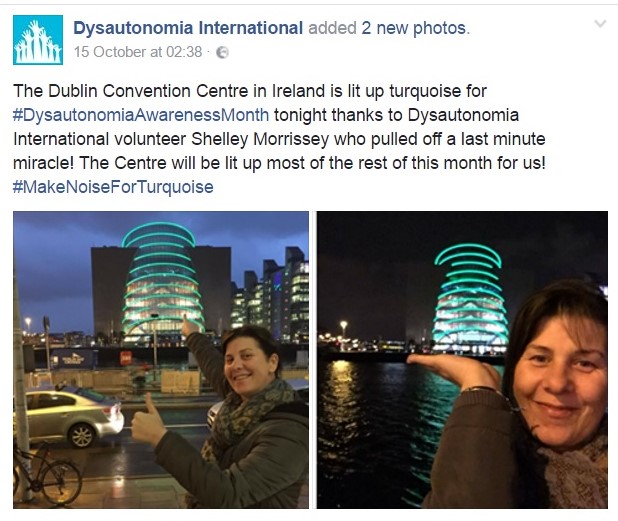