The wonderfully funny and annoying world of brain fog 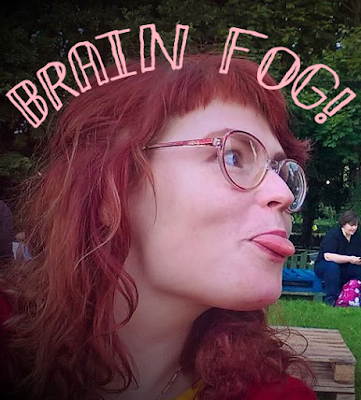 ...Or "mind mist" as I once accidentally called it!

For those who don't live in the realm of chronic illness and/ or chemotherapy, let me first explain the concept around "brain fog"/ "chemo brain"/ "mind mist", or whatever non-medical way you want to phrase it. I would even throw "baby brain" in there, as I imagine it's quite similar.

Everyone has those moments where they walk into a room and forget why, can't think of the right word for an object, have no idea where they left something important or simply lose their train of... thought. But "brain fog" (I actually went to write "brain flog there" -seriously) with illnesses is different -it's pretty much constant, and even though it can take several forms, it can be quite severe. It's more than just the normal mix-ups.

Usually there is no known cause or explanation for the phenomenon, and it's not generally medically recognised. I suppose in most cases it's something that isn't easily studied or monitored. During chemotherapy I put it down to, well -I've cancer... knowing that you have cancer is pretty distracting to say the least. Of course people with cancer have preoccupied minds.  I assume with certain conditions that effect blood flow and/ or oxygen to the brain, such as orthostatic intolerance, that the reason for confusion is a pretty obvious one. I had heard of the term "brain fog" within the chronic illness community before chemotherapy, and recognised that I had some issues (mostly forgetting where I left things!). But the first time I had actually heard a medical professional discuss it was when I was diagnosed with cancer -"chemo brain", as they called it. But other than that, doctors don't really bring it up. It's important to note that it is not a medical diagnoses, rather than an annoying, sometimes humorous symptom. If you suddenly develop this and have no idea why, please see your GP immediately so all possible underlying issues can be explored.

For me, since chemotherapy, my fog has grown to absolute mind farts. I can't recall the name of a lot of items, varies on the items from day to day of course, but it is constant. It's fine/ doesn't really effect my general life in a negative way. If anything, me and Bicky get quite a laugh from it. For others, depending on the reason for the mental blocks, it can't be very scary and worrying. The above example in the first sentence, is actually a true case -I had brain fog, about the term BRAIN FOG. Seriously.

Here are some other fine examples of what I'm talking about, from friends, fellow spoonies and fellow bloggers (as well as some of my own word bombs):

"After my coma I was convinced all people were ladybirds! And as for chemo brain, that's out on its own. Mid sentence a word would disappear and it was I'm going to town for thingidybob."

"Couldn't find the movies we rented, looked everywhere. Finally found them... In the freezer with the ice cream we had gotten... How were the movies you ask? They were cool. LOL."

"Yesterday I attempted to pour 7up on my hair drier while it was plugged in. No idea why!"

"School run morning rush: Closed the door with two toddlers and a baby in the buggy, few steps out I realised I might need an umbrella. Open the door, got whatever I needed then closed the door again but left the keys hanging there. On the way back from dropping the two toddlers I decided to go to the shop, when reaching for my loyalty card which is attached to the keys I thought I left the keys in the house. Called a family member to drive up to me and drive me and my baby to my teenage daughter's secondary school to get her set of keys. When I came home found out my keys were at the door."

"The other day I put the washing up liquid in the fridge and started washing the dishes with mayonnaise. Took about a minute to realise. Definitely the worse A.D.D. moment."

"Every time my girlfriend can't find something I ask her if she checked the freezer. She found her keys in there once. We have a good laugh every time!"


Sarah M.
"I was in a shop once looking for a pack of dried savoury rice and a staff member asked if they could help. I couldn't explain what I was looking for. I could picture the pack in my head but couldn't get it out. I had to eventually ask him to go away as his "helping" was making me ten times worse. I'm sure he thought I was raving mad as I repeated 'the rice thing', 'with the powder' ".


Sarah H.
"Yesterday I went to plug my headphone jack into my ear instead of the laptop! And two days ago I bought a new candle and was about to light it but decided in my foggy state that I should smell it first. I ended up smelling the lit lighter and burned off my nostril hairs!"


Maragret W. S.
"Picking up an object to take it to the next room and losing between rooms. It will end up laying on a bed or table that I don't even remember passing by. I get a lot of exercise retracing my steps."


Melanie H. O.
"I have lots of funny stories... unfortunately I just can't remember them!"


Avril Mc D. (from A Paler Shade of Beauty)
"I was convinced a passion fruit was called a mango. In my head I was thinking about an actual passion fruit but mango came out. Kev was going to the supermarket and asked if I needed anything picked up so I said yep yogurt and a mango. He came home whilst I was up stairs and asked if I wanted said mango and yogurt. I was disgusted to come down and find mango and yogurt in a bowl. By the way I hate mango. Didn't cop at all I called it the wrong name."


Catherine C.
"I recently called a jar a "glass can" -I didn't even realise I had mixed up my words until a couple minutes later!"


Sarah H.
"Yesterday I couldn't think of the word 'disappointed' so I described a puppy, and a press that contained both the lead for the puppy and other things, and the feeling the puppy gets when you're the press and he thinks you're gonna take out the lead and you take something else out instead. The person I was talking to was extremely confused/ weirded out!"


Amanda Ní O. (from Curly Sew Review)
"I repeatedly called a carousel a 'horse round about' one night while trying to explain something in a tv show. I just could not think of the word carousel!"


Evie E. (from The Zebra Mom)
"I once put a letter in a litter bin on the street instead of the post box."


Anonymous
"My other half called a coaster a "cup plate" this morning and has also used "window sheets" and "pillow sheets" (curtains and pillows cases)."


Jennifer D.
"I asked my daughter to hand me the purple towel... we don't own purple towels. So the look I got was like WTF -the towel was clearly red. Of course the other side of that story is, I was hospitalised the next day. Could barely tell you my name, they thought I had a stroke. It was a severe B12 deficiency."


Pamela S.
"I will come downstairs to refill my water and then forget to take it back upstairs - all the time."


Gloria S.
"I once asked my boyfriend to bring home some canned dog instead of dog food! And I am constantly making up my own words without realising when I'm having a brain fog day."


Kat H.
"It happens all the time for me but I'm not as clever as that [mixing up words/ phrases], I play charades...With my hands and my mouth!"


Amand Ní O. (from Curly Sue Review)
"Yesterday I put spoons in the fridge and just now I almost put roll on deodorant on my face."


Karen H.
"The funny thing with this is we probably don't remember the funniest brain fog moments... I was booking flights a few weeks ago, the lady asked for mine and my boyfriend's DOB. I gave both really quickly, didn't even hesitate. Then I started to think, 'did I give the right DOB?'. So I rang up and turns out I had given my father's DOB for mine, and one that made my boyfriend five years older than he is. It took a bit of explaining! I also posted a cheque meant for someone else to myself a of couple months back."


Amanda F.
"I usually just go blank on words. But I'm more of a put the peanut butter in the fridge and milk in the cupboard type."


Catherine C.
"I was trying to tell my partner to watch out as we were crossing the road, as it was really slippy with patches of ice. Could not think of the word ice... 'watch out for the ground mirror, I mean the water glass, the road glass, the icy glass, I MEAN THE ICE ON THE ROAD!'. Haha. Needless to say we nearly fell over laughing, nothing to do with the ice."


Bex D.
"Using the house keys to try and open the car and the car key to try and get in to the house is a common one for me. Also names. I don't know anyone's name anymore."


Amy Wall (from Little Miss Make-Up)
"I asked my boyfriend to bring me to the garage to pee as I was bursting, so went in and went got back into the car. We drove 15 minutes and I had a panic in the car, telling him he never brought me to pee and I told him I was bursting... he just looked at me and shook hes head and I was like whats wrong and he told me he did bring me already."


....Thanks so much to everyone who participated! I hope those reading this who weren't aware of brain fog in chronic illness (and temporary conditions), have learned something new. I sure had some giggles reading these and can definitely relate to most of them. But there's also a serious tone to some of the personal experiences above. Even to the extent that you may have had to re-read a couple, either in disbelief of the actual events or in disbelief that not only are these cases someones norm, but that they can laugh about the experience. While bothersome, sometimes scary if sudden onset, most people with illnesses have a whole array of symptoms to worry about -and brain fog can sometimes be the least of our worries.

Have you experienced brain fog/ chemo brain/ even baby brain? If you have any stories, please share in the comments below. And if any of the participants have a blog or website that I haven't mentioned already, let me know so that I can make edits.
Posted by CrippleBaby at 02:02:00