Stop telling children they can be anything they want to be - They can't. And that's ok !

I'm a big believer in making your own life and not depending on "what will be, will be", wishing things/ magic woo or blaming others for your situation. In this life hard work, actually DOING gets you places -no matter what wishy-washy quotes on Facebook tell you.

You cannot be anything you want to be -Disney and your parents lied to you. That's ok though! If you could, life would be far too easy. Boring, even. Have faith in yourself, of course, but back it up with actual action. It may still all fail and fall apart, but you tried -You didn't wait for faith to screw things up instead. If it makes you feel better that "it wasn't meant to be", "God must have better plans for me", -Sure, go with that. But sometimes, can we not just admit that hey that's life, and sometimes life is shit? Can we be practical about it for a minute?

When outcomes are out of your hands, such as with chronic illness and disease, then adapt. Change. You can control how you feel and you can control how you alter your life plans... as a kid I wanted to join the police. I kept this dream with me into my teenage years. I loved art and writing too but wanted to keep these as hobbies, rather than a career. I think it was at 17 I realised joining the police would never be possible -I could not run. I simply fell over my own legs when I tried to. I had known deep down, of course, that my health and abilities had been declining for years. But I had ignored it, pretended I didn't care much for running and sports rather than the truth that I was struggling to do them... That realisation devastated me, more than I actually even
knew at the time. But I just got on with it, decided I would create a new dream at some stage in the future.

My early 20's were spent in menial jobs but I still wanted a career with working with people. I did several courses, volunteered with various organisations and soon realised my passion would be to work with young people. I'm a giant child myself :) I love playing with young kids and I love watching teenagers mature and grow into amazing adults (given the right tools and support).

Growing up, my dad was a strong advocate for working hard. His job was his life and he worked insane hours. Granted, he was stressed to the max and this later resulted in issues -It's simply not healthy for a human to spend that much time working, to be that stressed... I myself have always thrived on stress, and if I could (was physically able), I'd probably be working 60 plus hours a week in a high stress job. I love organising, having things in their place, arranging both people and things, and for everything to be coordinated and scheduled. I'm a stickler for proper formatting and preciseness (or at least I was -these traits have lessened with the progression of my illness). I would be perfect in a high-pressured business role, perhaps as a PA... But I digress. This is me in mind only. My body simply does not allow it. Those inherited qualities aren't put to the uses that I wish they were.

Now I'm nearly 31 and my illnesses have again altered life in a way I can only control in a minimal sense. I must change the route of my goals and may have to accept the fact that my dream of being a youth worker will also have a short life. I may have to cease working completely... That statement kills me inside. I tell myself that even if I have to go on disability payments maybe it won't be forever, maybe I could volunteer one day a week... But I'm far too practical to lie to myself more than that.

So the last couple of months, with this in mind, I have been dreaming up new possible realities. At nearly 31 I didn't expect to be asking myself "what do I want to be when I'm older?", as I can't be what I wanted.

Obviously I will work for as long as possible (at least finish the job scheme I am currently undertaking), then...
I'm hoping this will be enough to quench the need for work and stimulation. But reading it doesn't give me warm, squishy feelings. At all. It just angers me... but ya know what? That's ok. I can't be everything I wanted to be, and that's ok! It has to be ok. 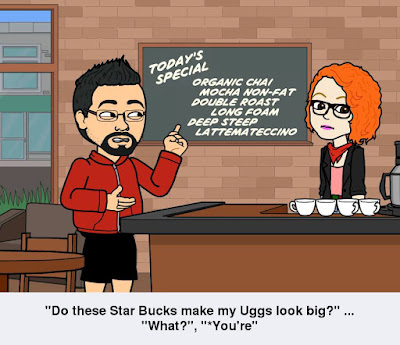 So why do we tell kids they can be anything that they want to be? I know we shouldn't tell a child anything negative about themselves, but we probably should stop bullshitting to them also. We've created a generation of teenagers and young adults who are completely lost and don't even know it yet. Who think life is easy and they'll be millionaires by the time they're 25... while I'm not in the game of crushing dreams, we are not doing children any favors by misguiding them like this.

We have a cohort of young people who believe work should be fun 24/7 and that their parents love their jobs, all of the time. They have little concept of taking action and guiding their life, a strained perception of what the terms job and career actually mean... "sure can I not just be a beautician? Cause that will be really easy to start up as you don't need any skills or training whatsoever, and there isn't 254 of them already in my town and I will make €700 a week. Or I'll just be a Kardasian, I haven't decided yet".

Thankfully not all our young people have fallen victim to this bizarre perception and still have some notion of the real world. But can we stop misleading them now? That 2 year old who was watching cartoons like yesterday, who you (as a parent) envisioned to be the next president, is now 25 and confused and depressed as to why the haven't been "discovered" yet.

Luckily my parents gave me no such delusions. They weren't cold. It just wasn't overly done when I was growing up. If it had been, I would been hella depressed now, wouldn't I? Think before you promise your kids a future that you simply have no control over. They may be an inspiring super model, but if they end up in Mc Donalds, lets be content with that too. Let them know that is ok. They have rent to pay but can still be happy.

It's ok to change and alter your dreams, and it's ok to be realistic.

...And don't get me bloody started on Disney!

"Follow your heart" -NO. Follow your gawd-dam head! Too many young women have gotten into too much stupid shit by not listening to their own, internal common sense.

Your big fabulous brain can tell you both what is right and what will make you happy...

Your heart is an idiot. Fuck Disney. 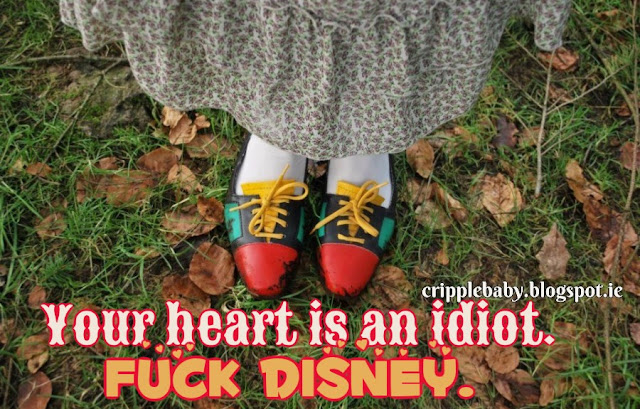 [Original image from behind the scenes of a photo-shoot
by Aine Hogan Photography]
Posted by CrippleBaby at 20:06:00