I've mentioned this briefly in an earlier post: Being already somewhat ill has helped me cope with the chemotherapy side effects -The ones I've had so far anyway!

1. Bone pain
As most of yous will know, either form knowing me or from reading the blog, I get quite a bit of this already from the hip dysplasia  and associated health probz! Pain is a big ball of shite, but having it from birth has built me up a little tolerance.... K, maybe not a tolerance, rather than I'm used to it. The chemo pain is a bit different and tends to cause most the pain in upper back and ribs (rather than upper hip, thigh, knee, arm, upper back and shoulder). Still, as I said, used to it.

2. Fatigue
Pain usually accompanies fatigue and my body is no different. When going through a typical 'bad phase' I tire easily or can't actually get up in the morning. Since starting chemo I've had only a couple of days where I needed to nap and have actually had very hyper, energetic days where I could do loads and still have energy! I'm going to put this down to the steroids which I have to take the first four days after each treatment. So, to summarise, I like steroids.

3. Nausea/ Vomiting
With a hiatal hernia like mine it's no wonder I don't vomit more (yep, that's right, another health thing -don't think I mentioned that before. Falling apart at the seams, I am! ...it's kinda related to the other health issues so lets
just stick it in with them) but stomach acid is definitely an issue and something I've to take medicine for for the rest of my life -the same meds they give you when you have... yep you guessed it, chemotherapy sickness.
I haven't had much as of yet (if anything I've been a bit better as I'm making sure I take the tablets every day) -until yesterday, when I may, or may have not have, gotten sick on my laptop keyboard while trying to do some exercise... Yep, that actually happened. Classy bird, me.

4. Kidney pain -The exception to the rule!
The one symptom I didn't have previously is the kidney pain. Have had a couple of really bad days where it can be hard to move, but I find it's my own fault for not drinking enough water the day before. When they say drink a tonne of water to wash the toxins out of your system from the drugs, they mean a TONNE!

So to conclude -My body was literally born for chemotherapy, giving me all the lovely side effects years before I needed them. I'd say if I'd been somewhat healthy, maybe into running (or able to physically run even), had an active life and a brilliant, full-time job, I'd be super, super pissed off with being diagnosed with cancer and going through chemotherapy and temporarily putting parts of my life on hold while I recovered. As it stands -My shit, lame ass body just got shitter and lamer-assed.

Thank you, crap body! Without you I would be healthy, and having cancer would be a real bummer! 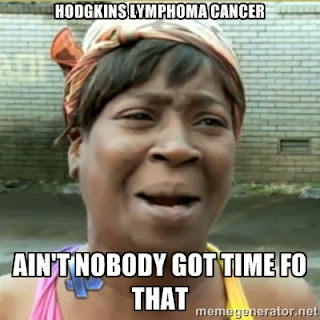