So after a year and a half since my first appointment with the neurologist, I *finally* had my second! Hurr-bloody-aaayy! Nothing incredible to report, but as I'm meant to mostly be blogging about my diagnostic journey, then it's worth a mention...

She would like to monitor my BP for a few days to see how low it is. Not the all important, illusive tilt table test but it's probably the next best thing! So at least we are finally getting somewhere. She also wants to see MRI results of one I had on my C spine a few years back (I was given a CD, hopefully still have it somewhere). At the time they took images of my brain but didn't actually read them/ include them in their report. They were mostly concerned with the C spine and any damage done to the shoulder. It's just cautionary, rule out any nastier reasoning for being dizzy, clumsy and the general lack of coordination.

Here's a photo from that MRI that I do happen to have. I look dam sexy as a size 0. 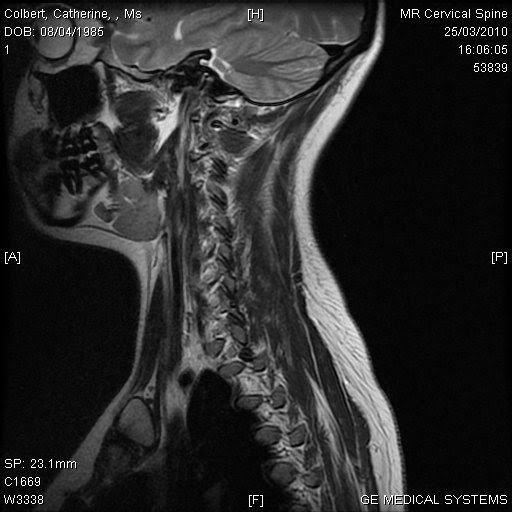 Not sure yet when I'll
be fitted with the BP monitor but she did tell me I won't have to wait so long for my third neurologist appointment -It will be in the very short time of only 6 months from now. Gee whizz. I'll have had the monitor by then and she'll have the results.

Can hardly contain myself.
Posted by CrippleBaby at 03:39:00