There's loads of these types of lists to be found on the internet today, but thought I'd write my own -What I believe are 8 important notes to remember if you have a friend or family member suffering with a chronic illness -These vastly range from MS to Crohn's and everything in between (literally too many to mention. Both visible and 'invisible' illnesses)...


1. Not being a doctor is ok. Not being able to pronounce the condition your friend has is also ok. Not knowing anything about it, is not ok.
Your friend or family member won't expect you to write a thesis on the subject, and you probably stumble over the letters trying to pronounce their illness and any medications they take for it. But if you are constantly asking what the issue is, and can't use Google, then just don't speak at all. Even those who are open and honest about their illness will get fed up hearing themselves say the same things -Ask once, ask new questions, and for the love of your friend's sanity, use Google.

Some won't want to discuss it -they may find it upsetting, they may partly be in denial. In this instance -Google, Google, Google! They might change their mind in the future so take an interest. Please use reputable sites though such as the Mayo Clinic.

It might be a big part of your friends life and who they are as a person. If you
want to fully know them, know their condition/ conditions.


2. Ranting doesn't mean your friend needs advice -Don't be hard on yourself for feeling helpless.
Don't be worried if you don't know what to say, how to make your friend feel better if they are in pain, frustrated waiting on appointments with specialists or generally having a bad day. They know there is often nothing to be done about these things, but if they are anything like me, they'll enjoy a good rant.

Not to say that if you think of anything to help alleviate symptoms that you keep your gob shut, of course not, but don't feel like a bad friend for not having all the answers! Your friend or family member will just appreciate you being there to listen to their rant, and if they are like me, to have a joke about some aspects of it -Sure if you didn't laugh, you'd cry! As they say! 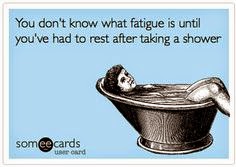 3. Not all diseases, illnesses and conditions are visible at plain sight. Some are "invisible" illnesses.
Just because your friend isn't using a cane, crutches or chair all of the time, does not mean they are lying or exaggerating about their condition. It's pretty shit using accessories to walk! And so most self-conscious humanoids won't do so until their legs are literally falling off them. This is dumb, yes. This can cause further damage, yep. I am an idiot for not using my stick, even when I feel not as horribly in pain as the day before, as I know it helps in the long-run and not just the short-term. But sure, whatever, I'm human and therefore a dumb ass!

And of course, not all illnesses require aids or mummy-like bandages all over the body. Internal issues like Crohn's disease, endometriosis, chronic migraines, etc. etc. are just that -Internal issues. You probably won't notice your friend is even unwell until they collapse from pain in front of you. 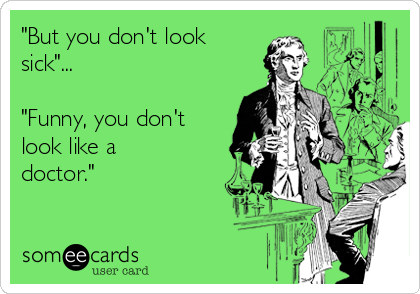 4. If your friend says she/ he is not in the mood to go out, they are probably in agony. Don't be a dick.
"I love being a hermit, never having a social life, missing out in fun activities and sitting at home in agony not able to sleep/ eat/ get comfortable at all, while my friends are in the pub having a laugh" -SAID NO SICK PERSON, EVER!

Not to say that alone time is always bad; everyone needs space. But if your friend says they can't go out, just believe them. Don't get angry. If you can't do this, can't have compassion or understanding on any level, don't be their friend. You're being a shite one anyway, so they are better off without you... Think about how upset you are that they can't make it out to that special occasion, multiply that by 10, and you might be somewhere near to how they feel about missing out on life. 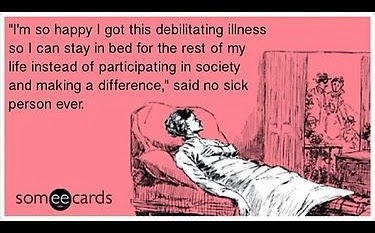 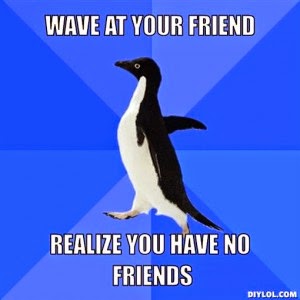 5. The future is uncertain and can be scary to talk about
It's not just social life that gets affected from sickness. The important stuff goes out the window too. Sick folk also have dreams ya know -The same hopes for the future that you have. Career/ employment, education, maybe even children... But shit ain't that easy and illness can be hard to predict. Planning for anything in regards to my long-term future, just isn't a luxury I can have the way other people do -It's a one week at a time scenario, with some vague ideas for my future planned in here and there. It can be hard to think about that.

Hearing "We'll cross that bridge when we get to it" from GP's and specialists becomes a regular occurrence. Because well, sometimes not even doctors have the answers. Everyone's body is different. Chronic illnesses can be progressive, but often irregular in how this progression takes place. Will your friend end up in a wheelchair? Bedridden? Unable to have children? Have to endure life-threatening surgery? Possibly.

Your loved one might not want to think about it and therefore might not want to discuss it. Don't be afraid to ask questions, but in regards to what their future holds, simply know that it's probably not anything positive health wise.


6. Just because they make the best of a bad situation or joke about it, doesn't mean they enjoy being unwell
Seems obvious, but you'd be surprised what some people think. I personally handle most my issues with a good ol' laugh, or at the very least a sarcastic quip thrown in here and there between myself and Bicky (or pretending I'm secretly a high-flying pimp with my cane)  -It's my illness, my wonky body, and so my right to do so.

That doesn't mean I love having the body of an 80-year-old. I didn't think as a toddler, "Gee whizz, I sure hope my body turns to mush when I'm older so I can rant about it on a blog that has 10 followers and no paid adverts" -I ain't living the dream here if that's what anyone thinks. But writing is good, healthy free therapy -Might as well do it. 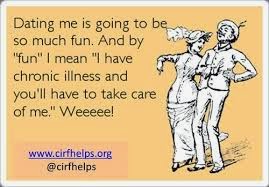 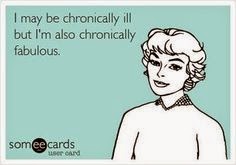 7. Being positive is not medical care
Having a positive attitude, at least in some regards, is essential in life. I tell myself all the time, "Things could be worse" -I'm not in a wheelchair, I have Bicky for help, I don't live on the street... But know this, only the sick person is allowed say that phrase! As a friend, you tell me things could be worse, I will at least scowl at you if not hit you with my walking stick.

Positivity and how you view things is clearly vital to a healthy mentality -Whether your condition is a psychological one (depression, chronic anxiety, etc.) or not. Being in physical pain is not a happy place. However, over stating the point kinda implies that my illness is my fault. That if I magically think about it I can stop my joints from popping out.

And it's not just average folk who say and think such silly things -As a child I constantly heard shite from specialists like: "There's no point in crying or being upset -That won't help your pain", and "You should be in pain, your body is wonky. It wouldn't be normal if you were pain free, with your condition".... Suuuuuuper helpful. Great medical advice. 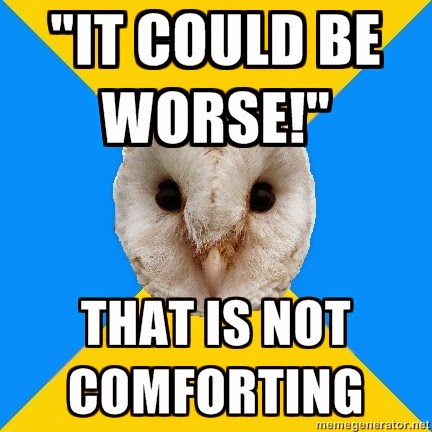 8. Everyone is different
Some see their condition as part of who they are, unsure if they'd change it if they had the choice (although this is usually only the case if said condition doesn't cause extreme pain or fatigue) -Others would give the world to feel 'normal'.

Just because you know two people with the same illness, doesn't mean they have the same views, symptoms, prognosis, dreams, coping mechanisms, etc.

People are complex beings and so are the diseases that control them. 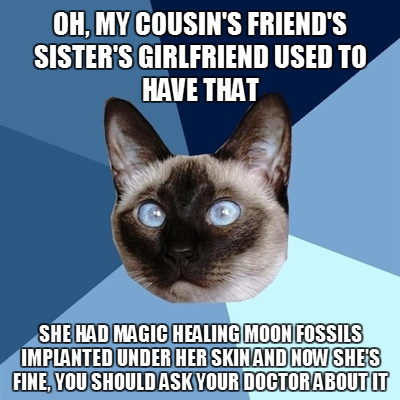 Thoughts anyone? Can you think of more? (I'm sure there's loads that I'm forgetting). Write away in the comments :)