My big fat, non-hysterical lady parts would like to make an announcement 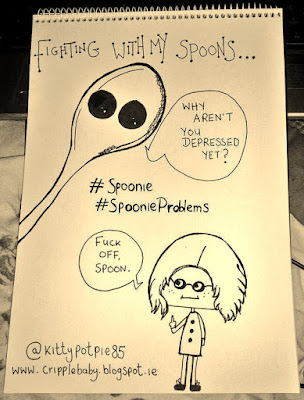 Lets talk about depression and social anxiety: No, I do not have them. And that should be the end of the discussion, right? Except I do not own a penis and so do not have that luxury -and have instead been blessed with fabulous lady bits, both in physicality and mind (mostly).

We might joke about "hysterical ladies", and our periods, having melt-downs over other women wearing the same (usually Pennies/ Primark) clothes as ourselves and being jealous over what both our boyfriends and friends do or do not actually get up to, but when did all this joking become the norm? the actual reality? -I don't have social anxiety, and that scares people. Am I really the last female left who hasn't succumbed to this bizarre phenomenon, or are my generation being led astray by the biased views of doctors and the ever increasing idea that we should be frail, afraid of everything and basically causing hysteria within ourselves?

An example of what we're talking about:
A woman goes to her doctor, she's experiencing sudden on-set migraines and they are affecting her sight and general quality of life. She has tried over the counter pain relief but it is not helping. Now, you can bet that the first thing a doctor will ask is how she is feeling emotionally -Is she stressed, sad, is her boyfriend being nice to her? Has her tiny cotton candy brain had a wee fart because the dress she ordered from Ebay is taking too long to arrive from China? Most definitely she has some form of social anxiety, for she has but only a vagina to protect her from the world. Or, even possible, is she a drug addict? That can tend to be prognosis number two, in many cases.

A man goes to the doctor with the same issues, and as he's a strong, bear like, hairy-chested creature with the emotional range of a shoe, he must indeed be in real, physical pain. Straight to the neurologist with you, so you can get that tumor removed and get back to punching rocks and shit.

Neither of these scenarios is pretty, both are
lame but both unfortunately true. Although I may have exaggerated for comical affect, obviously.

I'm reading many articles and blog posts lately that may suggest this; that doctors and specialists have become extremely sexist  in their medical treatment of women as of course, we are all very much so anxious and depressed, 24/7. And in turn, it seems in my opinion that this view from these trained specialists are creating a generation of women and men who believe this to be the norm. Even if you have never expressed such feelings in your life, ever.

One of the funniest personal experiences in my medical history was when I was first diagnosed with Hodgkin's lymphoma, and the consultant asked would myself and Bicky like to see a social worker to discuss filling in forms for disability and things like that. We agreed, only seemed polite and she could help us fast track things (ha, I laugh at that now -the disability crowd lost all my documentation. Oh Ireland!).

Immediately this lady pounced, looked at us (young-ish couple) and her eyes read "oh boy, jackpot"... the whole experience, start to finish, was just bonkers. A lot of "how do you feel", followed by "but how do you REALLY feel?". After some time she seemed to get annoyed at our laid-back attitude and we could actually see her getting angry and frustrated in front of us. This lady wanted out-and-out tears and nothing else would be acceptable... now ya must remember here, we had already been told I would probably live, and we had a few days to digest the news, so we were really ok and had dealt with it -hearing you are probably going to live is of course the main thing. But that didn't help this woman's job. She needed us to be in bits and to rescue us. This is extreme... As someone who has worked with many counselors on a professional level and have never heard of this. I suppose the difference being here is that had I known it was going to be counselling, I would have declined... I guess usually it's different if the patient actually does need to chat things over.

Stumped, she then turned on Bicky and said "I'm just concerned what happens when yous go home -tomorrow, next week...". All the time, directing her gaze to him -the feeble, young man who would probably leave me as I have cancer. How very dramatic. We laughed immensely at this later and he was also quite offended. But she was truly just trying to get a rise of emotion. She refused to believe we were ok, that was I was "ok", and even commented on that I could ring her at any stage when my "real feelings" (yeah, seriously) hit me. It's ok for people to be unsure of their feelings, but fuck me, I'm just getting sick of it -Of it being asked, being assumed... I'm not that type of person. Surely that's ok too, yeah??

It can be hard to disagree with doctors. After all, they are in the know more than you about all things medicine (yes, seriously, they are. They spent years studying -you read a couple of Buzzfeed articles and watched some YouTube clips, so shut up and get over yourself)... But in saying that, that doesn't make them all lovely people. They are human, and sexists exist in all walks of life. Those who make judgments based on their ideas of people also exist in every profession, and can over shadow any real, medical training they have obtained.

As a spoonie, I have much, much experience with this (one example pre-mentioned)... because obviously, whether the doctor/ nurse/ specialist thinks you are having panic attacks/ seriously depressed which in turn is causing some health symptoms or is not causing physical attributes, you simply must be severely depressed from being in pain all the time. Really? I shouldn't be happy about being in pain?

...Oh gosh, no shit doc, thank you for your in-depth analysis of my emotional well being, but say, how's about we order that X-ray now that I actually waddled down here for? As I'm in loads of fucking pain from sitting on these stools for two hours and even though I took some pain meds, I forgot my deflecting condescension shield. That's what my appointment letter said anyways -nothing about you feeling bored and looking for a humanitarian project to help you feel alive and human for the day. You good sir, seemed to have slipped into the wrong field of medicine... Which Buzzfeed article are you after reading on your lunch break?

Don't get me a wrong, a doctor being really, actually human (in hospital environments) is a rare and beautiful thing, but it is not this. It's the ones that listen and laugh and you know they feel very sad about your circumstances. Such as "Dr. Paul". And in fairness, doctors are only half the issue in this tale. Many spoonies do suffer from mental health issues, and many do need some form of help -whether the emotional tole of disease is causing them (extra) physical ailments or not. There is, however, an extreme lack of said services in Ireland -and as we all know non-profit community organisations are generally left to fill this gap. Many of who receive no government funding.

While depression and chronic illness can go hand-in-hand: It is wrong for any doctor to ever think that any health issue is ever caused by a women's fragile state of mind. This notion can literally kill people. Not carrying out necessary medical tests can kill people.

...But with more and more women coming forward and saying they have social anxiety, I do feel it's strange. It can't all be down to doctors convincing them they do, or not being able to handle their illness? Is it just something some people feel they have to say?

I get upset, yes, like any average person. I question "why the fuck me", I sulk, I get cranky, I'm sarcastic and sometimes hate most people... I do all the average things humans were built to do. No more, no less. So why does no one believe me until I've had a deep, long conversation about it? And even then I'm kind of looked upon like I'm a freak... when did being fine and having a vagina become an oddity? Not just in the medical world but in society as a whole. I'm sometimes made feel guilty by other women that I feel ok. That shouldn't be that way, I shouldn't have to pretend otherwise, to make others feel better, and that's what I wonder if it boils down to, for some women? 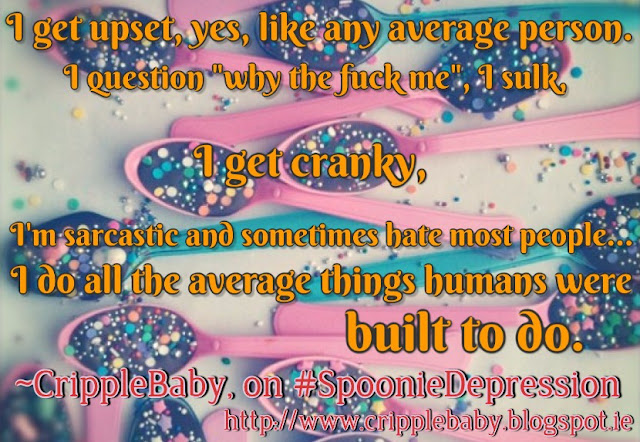 I'm not bragging here, far from it. I'm just saying I know what it's like to almost feel left out because I feel generally alright -about myself, my limited life achievements and quality of life, my future, my present, my past, the dreams I've lost, the muscle tone I can't maintain... wait, what was I on about? well, now I'm depressed... Har.

But seriously, I'm fine. My vagina would like to tell yous all that she is feeling quite fine, thank you doctors, and that she isn't feeling at all one bit hysterical or anxious or depressed. And it's ok to say so!

I better go now and eat chocolate while crying over some photos of puppies... as I feel we've spent so much time together on this post, our periods have synced.

For those out there battling their spoons or other demons, stuck between the HSE waiting list and a hard place -Reach out. SOSAD (Save Our Sons And Daughters) offer free and confidential counselling in Dundalk, Drogheda, Carrickmacross, Cavan, Navan and Tullamore. Free bereavement counselling for those effected by suicide is also available on these sites. The phone-lines are ran 24/7, so if you just need to chat on the phone, no matter where you live, please do ring day or night. Visit and like their Facebook page, too: SOSAD Ireland. 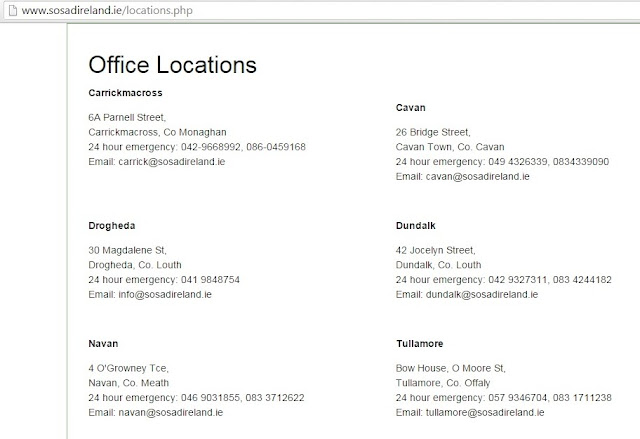 If you don't live near these offices and require help, please comment here or contact me and I will do my best to find you a free, non-HSE service where you live.