Chronic pain is a piece of Cake (a movie review) 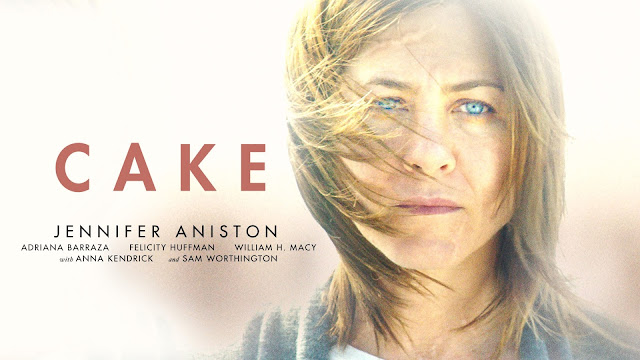 It's not often I purposely watch movies that contain scenes of chronic illness, pain or disability. I might write about my own experiences, come across as open and honest and able to deal with what life throws at me, but sometimes it's too hard to watch a mirror image of yourself through art (on a side note I watched 50/50 when diagnosed with cancer, it's also a goody). It evokes emotions and feelings that can be hard to deal with, but it can have it's good points too. It's depressing, yet releasing. Nice that someone, somewhere understood, that writers and actors really did their research. You feel in some ways respected by their work, and of course gratitude that they went about it the right way and not the easy way. These are not the type of movies that everyone will love, or that will break any records. When Hollywood gets it right, it gets it right. And Cake is one of those movies. Hard to watch, hard to admit its truth, but in a weird way it comforts me to know this can be used as an entertaining resource to those who want to understand what life with chronic pain is like. I hope that such moves affect others in ways of education and information, even if I personally find it difficult to watch.

Movie reviews aint my thing, so bare with me while I attempt to dissect this one while not giving away too much of the story line.

Jennifer Aniston plays a role that I would have assumed out of her depth, a woman named Claire living in chronic pain due to an accident. No make up, realistic scarring, greasy hair and pajama looking clothes nearly all the way through the movie show Aniston in a light that we're not used to seeing her in. The Hollywood beaut is normalised down to mimic the reality of what a chronic-painer may look like -heck, I'll be honest, I haven't had a proper wash in about a week! I've the water heating up now as I type in an attempt at this again. That's disgusting, yep, but I haven't had the physical strength to do so as of yet and I despise asking Bicky for such help. I rarely get dressed in "outside clothes". That's the reality of my life and many others, and that was the reality of this movie. No glorifying illness, in any way whatsoever. No scenes of over-enthusiasm, easy rehabilitation or Jennifer Aniston at any stage saying "the only disability is a bad attitude". 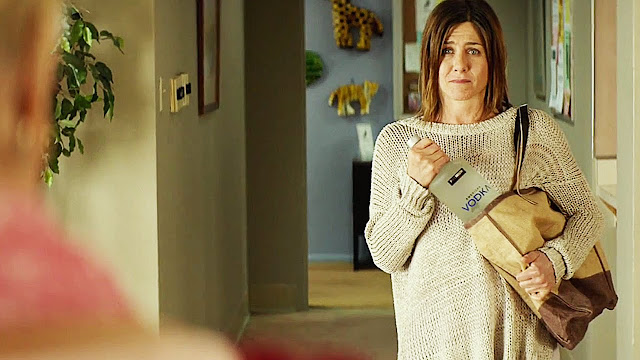 Actually, in parts she is a right c*nt. Beautifully negative, real and abundantly human. All the qualities I adore. This isn't about someone with chronic pain being depressed, this isn't about someone with chronic pain not trying hard enough, this is just someone with chronic pain being human. There's often a notion that if we feel down we are depressed, if we vent we are depressed, especially if we are women. And I have spoken about this before so I won't rant on to much. But feeling that we cannot complain about our shitty lives in just wrong -that is what could lead to actual depression. I run a Facebook support group for sufferers of chronic pain, and the amount of times someone says sorry to me after a rant is absurd. There should be no apologies needed for expressing your hurt and anger at the fact your life has become so... lifeless. Absolutely no apologies needed. I'm just as bad though, lol, so I can't say much on that! Again, another human trait.

The movie isn't all doom and gloom. Through it's realistic portrait of living in pain, comes with it the dark sarcasm and an almost heart-warming, crucial relationship with her paid carer -a woman who at one point helps her to obtain painkillers from across the border. The character of Claire lives a mostly isolated existence, with little to no friends and an ex husband who she shares a tormented past with, revolving around the accident. Pain controls her life, and has ruined her life. Due to the sudden onset of her physical ailments, in that her condition was not gradual or congenital, the story is told from the POV of adjusting to a new reality. A lonely, painful one. However, weather it is the gradual nature of all pain, the progressive way all our lives unfold, the element of loss and grief is always apparent -no matter what way the physical pain has been obtained, no matter at what stage of life the pain has come about. This movie is a movie of grief, in more ways than one. 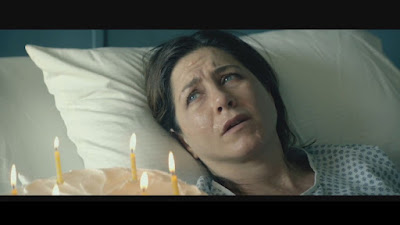 It is filled with characters who both don't understand and those who want to understand. Those who want to help and can't and those who simply think Claire is not helping herself. Like in life, all these characters views are interchangeable throughout the movie. There is even a glimpse of a possible love story, but it's far from the brilliant and easy happy endings that Aniston is used to portraying.

My favorite scenes by far were quite simply the car scenes in which, on really bad days, she finds it difficult to sit upright. Throughout the movie she remains mostly lying down while in a car. Something I myself have had difficulties with, also. Bicky has commented to me before that if sitting up is so painful that I could simply put the seat down and lie flat, and as tempting as it is, I have always resisted and remained sitting straight up -as painful as I find it. If it's really too excruciating, I don't get into the car at all if I can help it. I never really analyzed my thought process behind not lying down, why would I go against being comfortable? Why would I put myself through this, if I didn't have to? It was only when viewing this movie that I realised -I didn't want to go there. It was a step I wasn't willing to let myself take. In a life of things that I have no control over, it was something I could do to make myself still feel human. To simply, sit like a normal person in the car. Indeed, the character of Claire spends much of the movie trying to overcome this habit, to push through the pain. 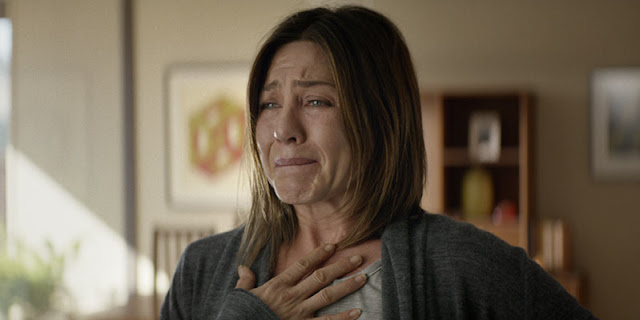 It's something so basic, so unnoticeable to those who can do it without even thinking about it, without any discomfort. And so I watched Claire lying down in the car seat and realised I didn't want to be that person. She had clearly done this once and now couldn't find the strength to sit up and endure the pain. If anything I'm now more determined to never lie down in the car. I don't think I have ever been so affected, ever had such realisations from such a simple scene in a movie. I may have very little control over my own body, but that is something I intend to keep. I refuse to feel degraded and would rather be in agony. Maybe that's dumb, maybe that's just being human.

Either way, I truly loved the movie and want to thank the writer, Patrick Tobin, as well as director, Daniel Barnz for not glamorising such a story. And of course, top marks to Jennifer Aniston who I fully respect as an actress now. Go watch it -if you are in pain yourself, if you know someone in chronic pain or just have a morbid curiosity; it's a good one. 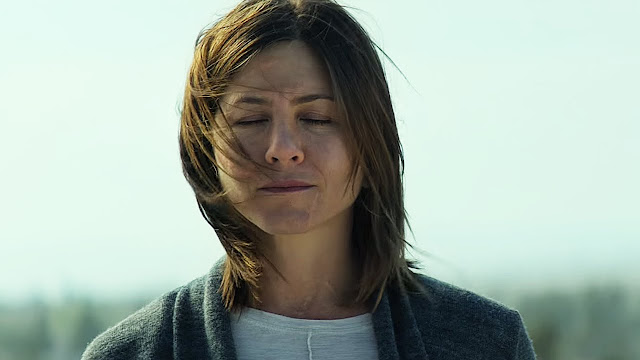