So it's been a while since I've updated the blog with any health news, and as always things are progressing slowly while the journey to receive any suitable medical care is dragging behind -and it's a constant battle to keep up against the increasing de-conditioning.

I suppose the main thing has been that I finally applied, and successfully managed to get, disability payments. It's still means tested, but not as harshly as job seekers, so I get a tiny bit more than I did on job seekers (Bicky works so I'm accessed on that of course). Most importantly though, it goes straight into my bank account. They also just sent me a free travel card, plus companion! Didn't have to apply for it. Delighted.

I also applied for, and received, a blue parking badge. The rollator doesn't fit in the boot unfortunately, so it can be hard to get it out from the back seat (space wise, between cars). So feeling like an absolute king with all my extra space and rollator. Outa me way, bitches. GP was shocked I hadn't already applied for one, making me feeling an utter gobshite (seriously, there's needs to a how to guide for disabled adults!). 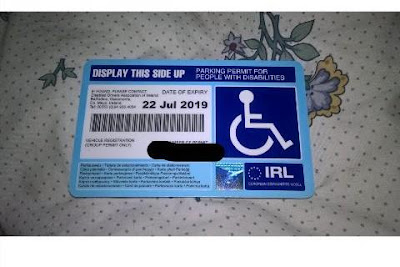 She also said I should also really apply for something called a primary health certificate -they are hard to get, will require a  medical assessment and probably an appeal, but she thinks I will get it and should have one. I've only actually heard that term for the first time a while ago, but from what I gather it makes applying for things (like disability parking permit) a lot easier... Had one of those moments of "Ah, I am so disabled". Which sounds ridiculous -I fucking write about disability for goodness sake, I just completed an art piece for an exhibition on the subject of chronic pain. My social welfare payment is called DISABILITY. Yet and all, when I'm with a GP or at a physio assessment, I'm almost... shocked, I guess, taken a back when they refer to it. I'm not in denial really... I guess I'm just dumb? LOL. Or used to it. Yeah, it's probably that.
As discussed before, I got my rollator. I can walk so much further with it. It doesn't help with pain at all really, but I'm more stable and have the chair there if BP gets low. Having support on both sides of my body is beneficial for all types of days. I named her Polly (stemmed from Roly Poly, then Roly Poly Polly, then abbreviated to just Polly of course). She's green. I'll post more about my beauty in the future. 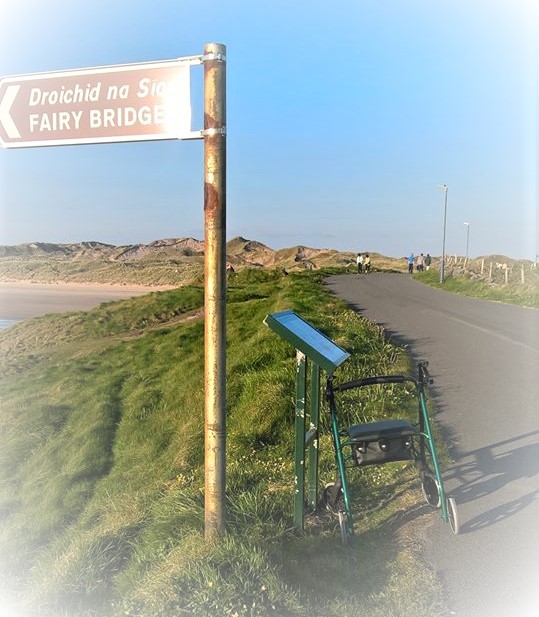 
I eventually met with an ophthalmologist. I had heard that some are very aware of EDS, but as this is Louth (the wee county... as in weeeeee did not win the post code health care system, haha) my GP wrote about it in the referral letter, thus giving him time to have a Google before I got there. And he did, even printed some info out. Nice man, but not really much he could do... After my assessment he said I did indeed have very dry eyes, as we already knew, but the only course of treatment is the artificial tear drops that I already use. Which are pretty useless, especially against the stabbing pain and the boiling heat that builds up. I think it's the CONSTANT need for the drops that really annoys me. On bad days, it's every friggin few minutes with the drops. I can't do anything outside, light and air are agony, light reflects oddly and everything has almost trails (it's hard to explain, not exactly double vision). I now hate Summer, and lights in general. It's very annoying, but things could be worse I guess -not every day is bad. Out of everything it probably should be my least concern. He gave me some free samples anyway, and said to keep an eye out (sorry, not sorry) for the many complications that could occur in the future. I have blue sclera too (which is common with genetic, collagen related conditions), although he said this is generally just a cosmetic issue.

With increasing exercise comes increasing standing, and with increasing standing my POTS/ dysautonomia symptoms have been, well, increasing. So it's very much getting in the way. I had been managing, well kinda, with water and salt for years. And just sitting down a lot. But I'm sick of fainting, near fainting and walloping my head and other body parts. When the neurologist had discharged me, they had suggested a cardiologist to get a full diagnoses, but I just really couldn't handle it -sometimes with chronic conditions, there's so much going on, so many issues and specialists that things become over baring and you feel suffocated  and drained. Especially as how 80-90% of appointments not only have a year, two year waiting list, but they can be very pointless and disheartening. But I decided now is the time to get the full diagnoses, and with that hopefully some help. So I went to see a a cardiologist privately, one I knew had some knowledge of POTS. He thinks I either have POTS or inappropriate sinus tachycardia, but wants tests to rule other conditions out first. He was against a TTT for now, as my resting heart rate was 130+ that day (it was very warm), he didn't seem to want to elevate it just in case. So I'm going for the tests publicly and should have them soon, then will make an appointment with him again for follow up. I'm pretty positive they will all come back negative. Fingers crossed I eventually get some medications to help. I'm hoping as the weather gets cooler my symptoms will subside a little... I really hate summer, must be the only Irish person to say that ha.

If you have been keeping up with me on Facebook, you'll know I've built myself very slightly, very slowly up -although with no help from a healthcare professional as of yet. It's basically just do what you can walk in the pool maybe, just do any bit of walking. But it's really just been left to myself. When you have Ehlers Danlos, or any hypermobility condition, the main thing to focus on is to attempt to build up muscle around the joints to stabalise them as much as possible -so that they will act as a protection against the constant partial dislocations, especially in lieu of functioning collagen. I've been doing a good bit of work in the pool, then built up by going on the treadmill on an incline (to work up my knees). And I've been continuing like that for the last few months, just guessing at things to do really.

At a GP visit I explained how my shoulders were becoming a lot worse, with panic setting in on a few occasions that I was not going to be able to get the joint back in place. There's that moment before I make the last movement that I think (or even say out loud), "shit, shit, shit. This is it. this is going to be a full dislocation". And on a couple of times I've needed Bicky's assistance. To help with this myself, I have stopped using handbags. If I must, I carry a small one, but as the rollator has a space underneath the seat it's another win for Polly. Anyway, my GP suggested that we try another referral to (yet again) another physio. We both laughed at the idea, but sure I told her to go ahead. I have nothing to lose. So got a letter, new building I hadn't been in before, nice woman, went through medical history and all the usual, before the ever so embarrassing physical and strength assessments. And then the usual bit of pity and sorrow, and I can't help you, and so on. But she did want to send me forward to another physio/ team, saying "I think your case qualifies for there".

Long story short -as there is an incredible lack of services for adults, I seem to be getting treatment for children... But in a senior citizens home. Hahaha. Ahahaha. Kill me. No seriously, it's fine. Incredibly embarrassing, but fine. I had my very first appointment last week, an hour and half of the usual. My new program consists of very basic things like lying down on my back and lifting foot up and inch, then back down (by 3). I know how insane that seems. I can actually walk. It hurts, I get very tired, but I can walk to some extent. But when I do these minor things, I simply cannot lift the bottom part of my leg up, either sitting down or lying down. I was told in Capagh that I needed a very slow program, very basic movements. It's only now, when I'm asked to do these tiny movements and I'm failing miserably, that I realise how bad things are. Crap. Big, giant crapola.

Lets just for the sake of the blog call my new physiotherapist May. May suggested keeping a diary of symptoms and dislocations for them. She wants to arrange an occupational therapist to come around to our house and assess my needs, see if anything can be installed to help on a day-to-day basis. And even more importantly -I get a second appointment with May. I finally, FINALLY have a physio and in touch with a whole team of supports.

And I quite like the elderly people, we eyed up each others rollators. And fashion... I tend to dress like an elderly lady, but like an elderly lady in the '80s. I duno, I guess that explains it best, but old ladies love me. Plus while I was going through my exercises I had the background singing of some man doing karaoke in the day room. Fashion tips and entertainment; I can't really complain. 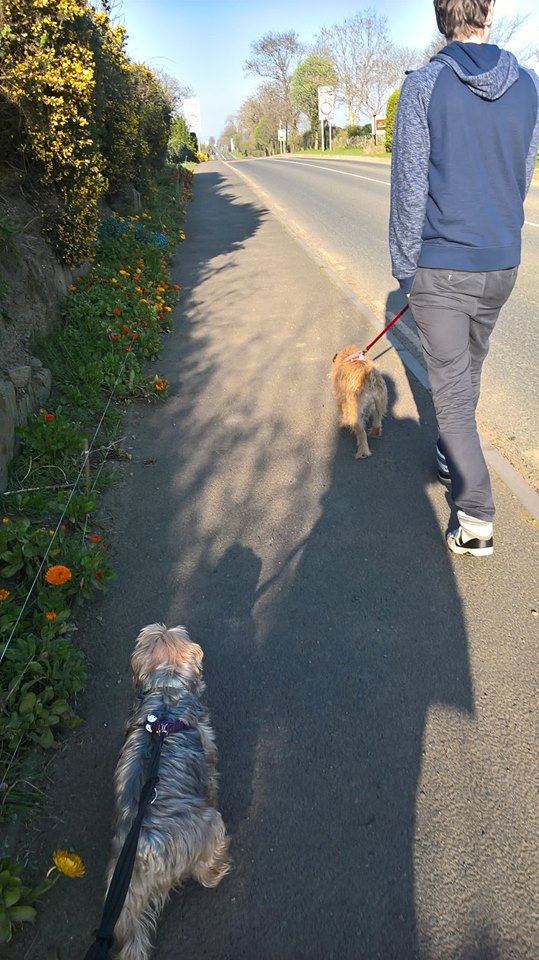