So yesterday I (finally) had my first appointment since finishing treatments (chemotherapy and radiotherapy) with the haematologist...

He's very pleased with how treatment went, he searched and poked for any bumps around my body and could feel none, asked about side effects from treatment and how I am, had bloods taken, and all that general doctor stuff.

I had assumed (probably from ya know, television, as even still, that's where most my cancer experiences and ideas have came from!) that as it's the end of treatment he'd wana book me in for another PET scan as I had had a mid-way PET scan (after chemotherapy finished/ before I started radiotherapy). But this isn't the case. He explained that while every doctor is different, he doesn't see the need for having a PET scan so soon. His reasons include:


This isn't to say I'll never have another PET scan, or that the radiotherapy team won't want to do one now (when I next have a check-up appointment with them).

So, without the PET scan, how do I reach the stage of the illusive 'remission' word, and what's next?
I'll have check-ups with the Haematologist every 3 months, where he will do bloods, poke for any new swollen lymph nodes and do the odd chest x-ray. This usually continues for 2 years and from what I gather after that (assuming I remain cancer free), the appointments will only be every 6 months.

Still, when do I hear this R word then?? -After discussing it with some people on the online groups, apparently you may never actually hear that word! But that's not to say you aren't cancer free -it's just not always used. I did not know this -again, screw you TV for giving me ideas of a completely different reality, haha.

I do understand why it's a word specialists are afraid to use... at the same time, everything's looking good according to the Haematologist, and nurses, so I'm going to take this as either I am in remission, or very nearly so, and treat it as such!

What's in a word anyway? ...absolutely nothing! :) 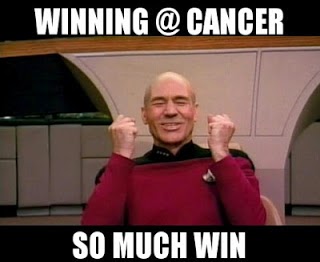