From neuro to zero

As long-term readers will know, I was attending a neurology clinic in Beaumont hospital... Well, kinda. Over three years I had about four appointments. Extremely slow, asked the same questions each time and with... well, lets just say the term "neurologist" is used quite loosely here in Ireland... Rather than repeat myself too much, here's some Facebook posts and links on the subject: 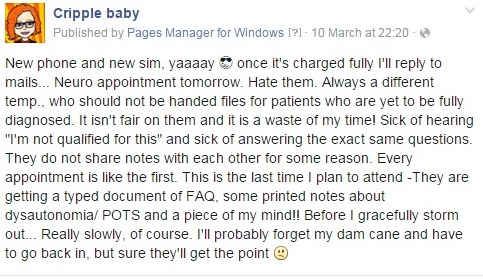 I don't think I've really any other posts detailing them... the third appointment was not only quick, but a disaster, and not something I really like to discuss:

Firstly, the absolute prick, gawked at me when I entered the room, like a bully in the playground staring at the cripple kid -"What's the cane for??" he asked, sounding grossed out (seriously!). Like he hasn't seen a disabled person in a neurology clinic before.

He hadn't looked at any of my notes and instead a few minutes later asked, "what's wrong with you?" -again, sounding pissed off... I replied that was the reason I was going to these appointments (duh) and hadn't been fully diagnosed yet (except the birth defects, obviously). He then got really flustered and
disgruntled, clearly not expecting a case where he would have to do stuff/ expecting to be given files of already diagnosed patients. "Have you not seen the consultant at all?" he asked, again, sounded angry, at ME (!!??!), like I get to somehow choose what doctor I get to see at each appointment.

I tried to remain calm and explained no I have not, I didn't know that was a big deal, and every time I bloody come to this effin place, it's a new trainee fuckwit like yourself, mate! ...Except I did not say that. Not like that anyway, not with that much strength and power and certainty... I wish I did, but I didn't... You see, it's draining. It's both physically and emotionally draining.

The ups and downs, the highs and the lows... The thinking: Today is the day I get my diagnoses, or at least treatment, or at least treated like a human... Then the fall of realising you got the short end of the stick again and ended up in a room with a sexist, ageist moron, who looks at you like you are scum. Who asks me to repeat and repeat painful and embarrassing tasks that I cannot do -Walk in a straight line, lift your leg... some sweet doctors see you struggle when they ask you to do these things, and put their arm out to grab you, and say, "that's ok pet; that's enough". But not all of them. Not pricks like this man, at my third neurologist appointment in Beaumont hospital.

And as much I get angry about it later -at the time, during the appointment itself, during the belittling and the snide remarks and sneers ("you probably just have like fibro, or something"), I freeze up and can't fight back. Can't shout, like my GP says I need to do more. I'm tired. And in that moment, in that room, I give up. 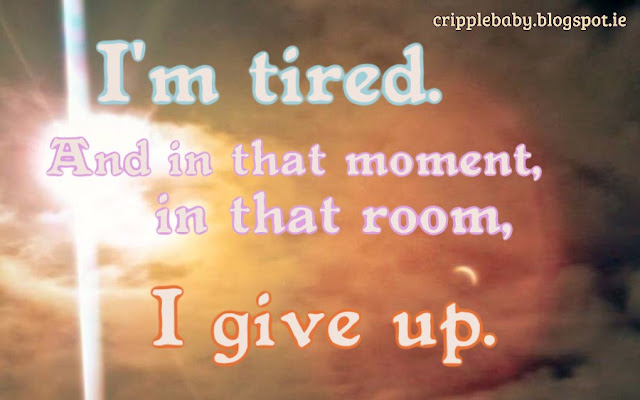 But I don't really... I go home, have a wee cry with Bicky at the unfairness of the world, and then gradually get back into life (well, depending on what life my current symptoms allow)...

Until the next appointment with the next specialist, and I feel anxious in the waiting room -Will I get "That's ok pet; that's enough", or will I get "What's wrong with you?"... Or the good ol' "Your body is wonky. You should be in pain".

On a side note:


The blood pressure monitor (Ordered in my second neuro appointment -See second link above☝) was an absolute disaster! After the nurse put it on me she said, "now, you go home and put your feet up"... when I mentioned I could't, as we needed my BP reading while standing, she kinda just ignored me (most average nurses and doctors don't think low BP is an issue, they don't understand what the results of it can mean for a patient -It's always the traditional, high = bad).

So I get home, and when I'm standing, the machine tries to read and the screen beeps the ERROR message. Suuuuper. Pointless.

When I went back to my GP and explained the issue, she was like, right screw this silliness and asked me to lie down on the trolley... She proceeded to perform a poor man's tilt table test. This is often used in Ireland as it's so hard to get a real TTT. However, many doctors are afraid to do the poor man version -After all, ya might faint because of low BP... Eeeemmmm, hello? I stand and walk around ALL THE FRIGGIN' TIME. It's kinda how most humans get about. Standing is a struggle, yes, I feel very dizzy, yes, but I am nearly 31 and have in some ways gotten used to it. Plus if I faint, I faint. Lets not be ridiculous about it.

So it worked, and showed low BP when standing that did not correct itself as with normal people.

Within a few minutes this beautiful, bright and amazing GP proved what others had been trying to attempt in years work of neurology. So, go fuck yourself, neurology, is basically what I take from this whole experience.

From the repeated TTT and and my symptom history, we can just about say dysautonomia. In any case, the treatment for this, for me anyway, is the same -Salt, water, rest/ lying down, elevating legs, compression stockings, and most recently, pain meds and Baclofen. AKA, no exact, medical treatment as such. In fairness, my GP is great and doing what research she can, consulting with her colleagues. But neither of us are experts.

....Annnnyway, back to my recent neurologist appointment: 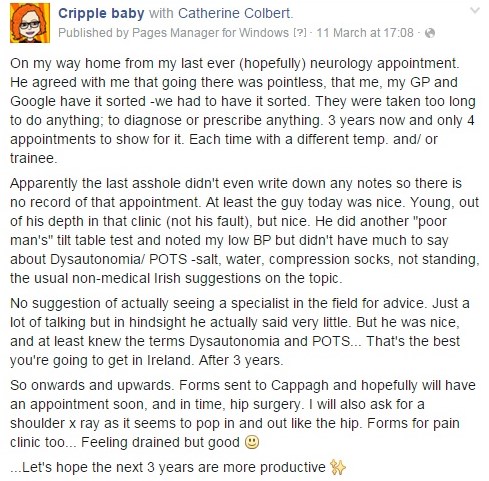 Yes, so there was no notes taken from the asshole at my last appointment -No record of me being there. Surprise, surprise! And this new guy could have been worse/ he was grand... average/ at least not a dick... he was so fresh outa college I could still smell the noodles and the Brylcreem. He spoke about a few different health topics, knew terms like "dysautonomia" and "POTS" (woooo) but he said everything like actually reading from a book. I bet he was a real good student... Think like: 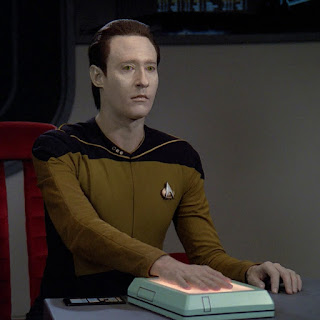 Data. That's kinda what he was like. And if ya don't watch Star Trek and don't get the reference well then tough, and also, you are a fool. It's a very good show and you should go watch it immediately...

Sometimes these type of appointments are just down right humiliating. And I don't want to do them anymore. But I have promised Bicky I will see the pain consultant and of course the ortho in Cappagh. If either of these initial appointments go badly, I will not return for further ones.

But I have to give it a go.

Having a normal life has to be worth another try.