Just some housekeeping and catching up! I've been super busy with various projects the last while. To read my last health update, click here. I've exciting news tomorrow, but all this malarkey first.

Physio, bracing and the never ending saga of the hips


I continued with my local physio briefly, but we have naturally reached the end of the road. Although I know she is available any time I need to contact her for advice. 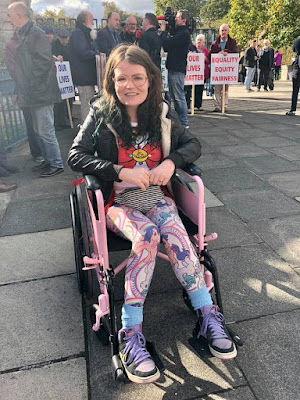 I was yet again denied surgery for my hip -this time by a consultant in Beaumont. On arrival neither the locum nor the consultant had heard of Ehlers-Danlos syndrome, but of course, as always, ten minutes later (after I told them what it was), they were experts. Spouted off rubbish about how the surgeries to help preserve my hip may make me worse, due to my EDS, in that more than likely/ in most cases the surgeries are unsuccessful. No stats, no real information. This contradicts what I know from other EDS/ hip dysplasia patients who are living their life to a much higher level of mobility (hip wise, at least) than they were before. While this is all anecdotal, clearly, at least I had anecdotes. These doctors had no information. There are indeed some issues with EDS patients having surgeries -for one, we take longer to heal. Major surgeries need to take certain criteria into consideration (for say, the likes of surgery for Chairi Malformation). These were not the issues they brought up however, in fact they just rambled.

On entering the orthopaedic clinic I first met with the locom who discussed my X-ray and noted how I didn't yet have arthritis. Those of you with similar conditions will know how consultants and doctors alike hate using the word "arthritis". They think it will send patients into uncontrollable hysterics, that we will demand action. Especially women. We will become so hysterical our vaginas will fall off and we will wither and die with the shock *clutches my pearls*. At my age, with untreated hip dysplasia, I would be extremely lucky to not have some arthritis. I'm often told I have "damage", indeed apparently I have more "damage" on the healthy hip rather than the dysplastic one. Either way it's a non issue -I have much more pressing issues that the natural occurrence of arthritis! Plus I am on painkillers and medications that may be used to treat arthritis anyway, so a sub diagnoses of such I pretty irrelevant.

So the consultant enters, babbles on about why I can't have the surgeries to save my hip -We would make you worse, they aren't good surgeries, your EDS, your EDS, your EDS... When they realised both their lack of knowledge of EDS and even recalling the names of the hip surgeries were showing, the consultant decided to play another hand. "You have arthritis so can't have surgery". Wow, what a game changer, after twenty minutes of trying to work one angle lets just go with this instead. My eyes darted to the locom as I spoke, "Oh really, it's just I've been told I don't have arthritis". "Yes, you have arthritis" the consultant repeated, proud as punch with his decision to whip out the A word as it suited him. This isn't my first surgery rodeo, so while I understand that yes, bad arthritis makes a joint unsuitable for surgery, that simply is not the case here. I have quite mild arthritis/ "damage" I gather from previous X-rays, and my healthy hip is greater effected than the hip that actually needs surgery. Certainly not enough to impede any needed surgery.

Needless to say they were highly peeved at my suggestion that they could ring my London consultant, the actual expert on Ehlers-Danlos, and discuss the EDS implications of surgery with him. He had told me previously that EDS or not, I need surgery and he cannot understand what is going on. He is well aware though that certain consultants and their almighty egos would not be happy to call on another consultant for advice, but his offer for help and guidance is very sincere and he means well in the best interest of the patient. As was my passing on the message. They also did not assess my walking (I was in a wheelchair that day) to see how the hip dislocates as I move, or read over my very detailed physio report from London. 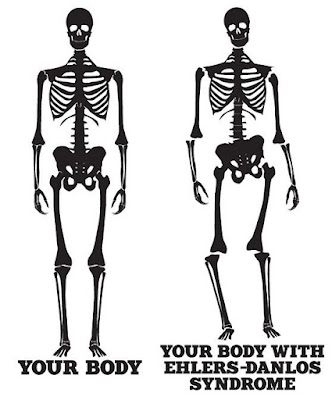 My local physio has suggested getting a referral back to Cappagh, who I was with initially, as they are an orthopaedic hospital rather than seeing an orthopaedic consultant in a regular hospital. We're planning to do so later next year. As for everything else, we are only going to London consultants in future. We're pretty done with the health services here, even the private ones are pretty appalling (I'll discuss the whole cardiologist debacle another time). Everything will be private and the UK rather than pay private here (the price difference being the flights and hotel stays). And of course, I and many others will continue fighting for a consultant.

My physio applied for a knee brace for me through the HSE, which we waited months for, and unfortunately it's completely unsuitable. She knew when ordering it that it was quite sport like, and probably wouldn't help the knee from over extended and dislocating. She ordered it anyway and we tried it and it in no way helped. It just hindered normal movement and didn't prevent dislocations. Apparently in Louth they only have two companies to order from, and there just isn't anything suitable. She's hoping that the Dublin hospitals have a better catalogue and can order something. I'm getting fed up of this. I finally found a good shoulder brace online (for a less than great 80 quid, before postage) but I'm planning to buy it soon -Just hope the sizing is correct. Price of all these braces aside, it's really difficult to try and understand the sizing when you have nothing to compare it to. They are also rarer than you might think, I've been in mobility aid shops and they just respond "oh no we wouldn't have anything like that, you would need to see an OT". They are vital though to prevent dislocations and further damage, and I should have had these a long time ago. If I hear nothing soon from anyone in Dublin I'll search again for an appropriate, non sport one online.


Nearly three years of waiting and I finally met with a pain consultant. This appointment was far more refreshing! Both the locom and consultant were quite versed on EDS and Chiari Malformation. The consultant suggested two types of injection into by back -trigger injections into the muscles, and nerve blockers that would travel up into the neck. The hope was the trigger injections would calm the hardened, damaged muscles and that the nerve blocker would help with Chiari symptoms. They don't work on everyone, so I was aware of this going in as well as the possible complications. Couple of weeks later I was booked in for this day procedure. I was surprised at how much they helped, although both are obviously only temporary. Hopefully I will get another appointment soon, although I'm yet to hear (I think they are meant to be every 6 weeks apart). I have a follow up appointment with the pain clinic in a few months, but I'm hoping to have more injections before then as planned.


Many of you may remember my canvassing to repeal the 8th amendment here locally in Dundalk, with our group Dundalk for Choice/ Dundalk Together For Yes. Since the referendum we have transformed to Dundalk for Change to fight for new issues and injustices, including tackling the housing crisis and ending direct provision. Yesterday we held our first AGM and I'm excited to say I'm now elected as Social Media Officer and will be working with a great bunch of people (we have been working together for ages, but now it's officially official).

The turnout was fantastic, and I think we will have a lot of new members joining our ranks over the next couple of weeks.

And of course I have also been busy with Irish EDS & HSD committee work. We attended the Still Waiting's Campaign national health demonstration recently, with our shiny new banner, and were very pleased with the coverage we received on the news, print and radio (I think my newly spray painted pink wheelchair helped!). I've still so much work I want to do on this, and now that we have the banner already I want to get the use of it. Protests, gatherings, awareness pieces... I'm also hoping of course that any work I do for one committee can help the other. Part of our objectives with DfC is to bring about changes within the HSE -The waiting lists, trolley crisis, lack of GP's, lack of consultants.... I've some work to do tonight and then after that I won't be around for the next couple of weeks... Will update on that info tomorrow.


Unfortunately I can't attend the Blog Awards Ireland this year on October 25th, but I'm honoured to be a finalist for my blog piece In My Shoes!

Really wish I could attend, the theme this year looks fantastic.
But I'll be away... As I said, more on that tomorrow 😉 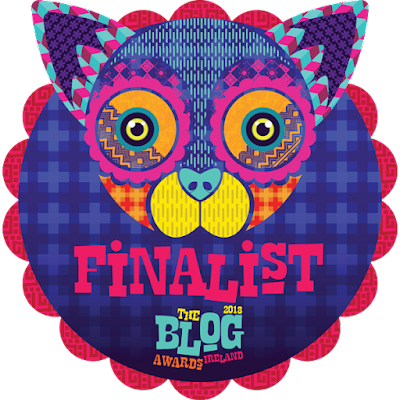