The week I was diagnosed with cancer

On Monday December 2nd, 2013 I went for an appointment to the hospital -My neck was hard and tender but sure what else is new! The surgeon fella had a wee feel and his intern joined in, talking in medical terms I didn't understand. All of a sudden he said I needed to be admitted to the hospital for tests and that he knew I wasn't expecting this but it would be for the best. Bit shocked but kinda thought, 'oh that's good'... for those reading who aren't from Ireland, out-patients appointments can take a long time for such things, and this really isn't the norm. The seriousness and urgency in his voice however then made me think: 'oh bollox'. He told me my lymph nodes were inflamed. Now the only thing I know about the lymph nodes is that they can swell if you are sick from an infection... I had been absolutely fine; no temperature, not even a sniffley nose.

They kept asking me though -from the Monday to Friday that I stayed in the hospital, every nurse, doctor, intern and member of 'my team' (I loved that term, I had a 'team'. No matter what crap was going on I amused myself with the fact I was some sort leader of a gang. Probably not a street fighting gang, maybe like a dance gang, and we'd 'dance out' of every bad situation we found ourselves in) asked did I feel sick. They also took bloods each day. I have very crap veins so this was a nuisance. They said they hoped to do an emergency CT and then a biopsy if needed.

On Wednesday this all happened in a rush, had my CT and as soon as
the surgical room was free, a gown was thrown at me and the nurse yelled "quickly, we have to go now!" -they were literally trying to get me in and out before the next emergency or appointment was up. Waking up from surgery I felt ok. Simon was there as it was visiting hours. The next morning I woke in agony -lifted myself out of bed but couldn't move my neck. Later that day, when I had loada pain relief, I reflected on this... 'duuuuh... I just had surgery -of course I was in pain'. Hahaha, I felt like such a dope for not expecting that. I guess it was so rushed, I had no time to think about it before hand. I was later told the surgery had been pretty deep -sure did bloody feel like it anyway.

Biopsy results apparently usually take a couple of weeks but 'my team' informed me that they hoped to have some by that Friday -only 2 days away. Say what ya want about the Irish medical system (and I have plenty to say myself, hahaha) but to me, that they'd rush the results like that, was amazing and I really feel gratitude for that action and whoever was responsible for it.

On Friday morning my main team guy, the surgeon, came to my bed (actually a trolley... beds are like gold dust in Irish hospitals) and told me that cancer (Hodgkin lymphoma) was the result they were hoping to receive from the biopsy results -that it would actually be the best scenario. Shocked me of course, but I kinda understood. His stance was that at least they could treat cancer, and in particular, Hodgkin's lymphoma is very curable. Brief discussions of Lupus had occurred during the week as apparently this illness can make your lymph nodes swell and because of my illness history (as well as family history), so I assume the other diagnosis options would be just as lovely.

A couple of hours later, just before Simon arrived at the hospital, a mumble-y member of my team came to my 'bed' -mumble-y as I couldn't understand a thing the man had said to me all week. He closed over the curtain and informed me that I had Hodgkin lymphoma and that a new team would be down to speak with me shortly and then I could go home. He then left. A nurse overheard and came in... which was great, cause I wasn't even sure if he had definitely said that (and either was she) so she was able to check my chart. Plus I didn't really fancy being alone as I waited for Simon.

In the end, there was no one available to come speak with me. The nurses tried their best but they didn't know much about cancer to advise me. There wasn't even any leaflets about. An appointment was made for the following Monday to see the haematologist and I'd just have to go home and wait out the weekend, wondering what stage I was and all sorts of things.

I was weirdly ok -me and Simon had had a conversation Thursday night and prepared ourselves. I was more annoyed about leaving the hospital without any information for the likes of my mum, friends and family. I knew everyone would be shocked and upset and I at least wanted to comfort them with information or how bad/ good it was.

I met with the haematologist that Monday and found out I was stage 2A (A because I don't have the 'b symptoms'). I kinda knew myself as I only have the cancerous nodes on one side of the diaphragm only -both sides of my neck and in my chest. I became a HL expert over the weekend looking up things online, Simon too. I still look up things now and it's amazing the information friends say to me -everyone's has had a good read, haha. Telling them and family was hard and it felt very strange that me and Simon were dealing with it better, but I assume that's natural enough.

We still are coping really well -I've started chemo and had some side effects but nothing new to me -sore bones, feeling a bit tired, numb hands and feet -haha, it's like my body has been preparing for chemotherapy all it's life! :P They hope I will only need between 4-6 rounds: a round being 28 days where I have two treatments in that 28 days, so roughly 4-6 months. I will have a midway PET scan I think at the end of February to see how I'm getting on and if I need any radiation. I've already had one PET to confirm that the CT was correct, and luckily it was -just have the cancer in my neck and chest.

Irish Cancer Society leaflets and Facebook groups have also been a great help. I find in the groups that people ask questions I hadn't even thought of. They also made me see how lucky I am. I know that might sound a bit mad, but honestly, if ya have to have a cancer, HL is the best to have -the most curable (even at later stages). I am so, so lucky. Also lucky that they found it this early AND that I'm not a child or teenager. So many young people going through this and other cancers; can't even imagine what it's like for them or their families.

Sorry for this depressing post, haha, but sure that's what ya get when ya read a blog called 'Cripple, Baby!' I guess!


Tad annoyed that my hip and other issues have to go on the back-burner while this is being sorted (as well as my life in ways) but as I see it -this is just a blip in the road; baby! 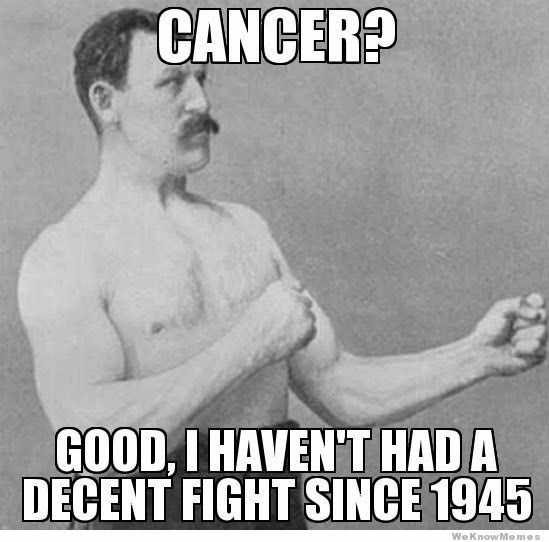